Peppercorn caught up with Tudor Filaret, who has been interning with the UN International Residual Mechanism for Criminal Tribunals formerly known as the International Criminal Tribunal for the Former Yugoslavia. That’s even more complicated than “The Artist Formerly Known as Prince”. Find out about how to survive riding bikes in the Netherlands and an intensive overseas internship…

Can you take us through a day in your internship?

Depending on my workload that week, I would arrive before 9 am to attend to my emails and to plan my day. Day-to-day tasks included cite-checking motions for grammatical consistency and accuracy for source materials, analysing evidence relevant to the case, and drafting motions related to the admission of evidence.

During busy periods, my colleagues and I would work together intensely to finish urgent tasks. During quieter weeks, we would sometimes go out for lunch in nearby parks to soak in the sun. Regardless of how busy it was, the team always found time to help each other out and to share a laugh. 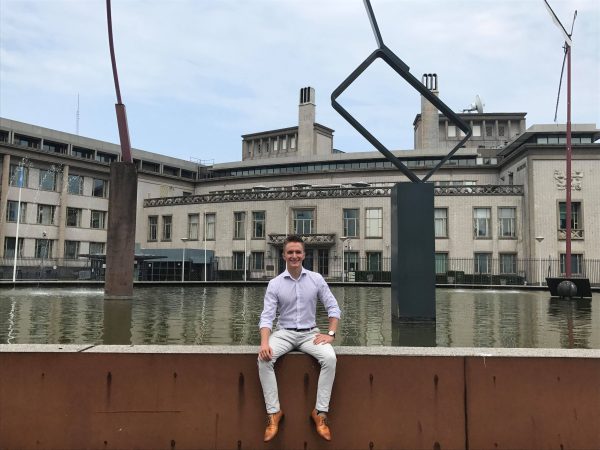 Can you explain Stanišić & Simatović for those who aren’t familiar with the case?

During the war in the Former Yugoslavia, various paramilitary groups such as the “Red Berets” committed crimes against humanity throughout Bosnia and Herzegovina, and Croatia. Against the backdrop of an ethnic cleansing campaign perpetrated against non-Serbs, crimes committed included forced deportation, murders, and persecution.

I worked on Prosecutor v. Jovica Stanišić & Franko Simatović (MICT-15-96), which is a retrial. The indictment for this case alleges that Jovica Stanišić and Franko Simatović, two former high-ranking intelligence officers in Serbia, orchestrated the training and financing of infamous paramilitary groups including the Red Berets.

The indictment further alleges that Stanišić and Simatović directed these paramilitary groups to execute the brutal ethnic cleansing campaign throughout Bosnia and Herzegovina and Croatia. Through their responsibility in a joint criminal enterprise with other high-ranking members of the Serbian leadership, Stanišić and Simatović are being prosecuted for committing crimes against humanity.

What’s the most exciting thing you did during your internship?

Because of the significance of the work I felt excited being involved in all tasks. If I were to choose one standout experience it would be helping to proof witnesses and attending court. I was proud to see my work with a witness deployed in court during examination-in-chief by the prosecution attorneys. I was in awe when watching the most brilliant legal minds arguing about such a historically significant conflict.

What was the team like that you were working with?

I worked with eight other interns and eight attorneys. I had the opportunity to work with individuals from countries such as the USA, Canada, Germany, France, Netherlands, Switzerland, Aruba, Italy and Zimbabwe. Everybody brought their cultural values to the workplace, which allowed all of us to learn from each other and to produce work that reflected our diverse perspectives.

I am proud to say that the people I have had the honor to meet and work with were very kind, driven and engaging. Within the intern pool, we were supportive of one another during our working hours, but also in our other personal pursuits such as planning travels or helping each other with our next professional engagements. The attorneys that I have worked with were very patient, open to communication, and were actively invested in our personal and professional development.

What’s one life lesson you learned from your time there?

Everybody is more resilient than they think they are. While I have had some frustrating moments, such as taking 30 minutes to locate salt at the supermarket, this frustration made me calmer in hindsight. Over time, everyday inconveniences seemed smaller. Being able to ‘zoom out’ ultimately gave me a calmer perspective on life.

What advice would you give to a student considering applying for a similar role?

If you are a law student who is in their first three years of university, I would highly recommend doing a law exchange overseas. I am confident that completing a law exchange at University College Dublin brought me over the line in the initial application stage for this internship, as I was able to show that I had previous experience in living overseas. My exchange also allowed me to complete subjects that I could not have done at the ANU, such as mooting and advocacy, and certain types of international law. I can also recommend the ANU-Alabama summer study program.

If the time has passed to complete a law exchange, I recommend doing Evidence or Law of Armed Conflict to help prepare your application for the UN-MICT. For the internship application, the UN-MICT asks you to submit a sample piece of academic work that is relevant to the work of the Tribunal. For my application, I submitted a research essay that I completed for Evidence, which addressed issues related to cross-examination on vulnerable witnesses.

How many times were you nearly killed on your bike?

I certainly had a few close calls during the first month of living in The Netherlands. I believe was a combination of me biking on the wrong side of the road and forgetting to use hand signals when turning.

Would you recommend this internship?

I would recommend this internship to anybody at the ANU in a heartbeat. Going to work every day was an absolute delight, and I found myself engaged in all tasks assigned to me. If this wasn’t enough, the working environment made each day enjoyable.

This internship has prepared me to work in an international environment and face challenges with greater self-certainty.

My final message to everybody is to go forth and apply for an internship at the UN-MICT. I promise you that you will not regret it.

If you are thinking of applying, I would recommend speaking with your professors. As always, I would be more than happy for prospective applicants to get in contact with me at u5583341@anu.edu.au for tips about the process or living in the Netherlands. Click here to find out more.