Following the statement by the Home Affairs Minister, Peter Dutton, many have questioned his motivations in instructing his office to investigate helping at-risk white South African farmers. Bill Shorten quickly (and naively) deemed this act ‘racist’. However, if one takes a quick look at the facts, the superficially controversial move becomes a rather logical humanitarian response.

Apartheid ended nearly a quarter of a century ago, bringing much needed democracy to South Africa. Since 1994, poverty, crime and corruption have become rampant with no indication of decreasing. The ruling African National Congress have failed to properly manage and improve the lives of disadvantaged citizens. Attempts to rectify systematic inequalities from the Apartheid era have resulted in a targeted attack on the white Afrikaner minority who make up 8.1% of the 56 million South African population. The most unusual attempts include affirmative action that have forced companies to hire a workforce which must comprise of 92% black people, sometimes to the detriment of well-qualified candidates who are not encompassed by this category. White people are furthermore ineligible to receive government grants with some reports stating that white individuals have been turned away from hospitals and schools due to their ethnicity, an act which would have Nelson Mandela turning in his grave. When Archbishop Desmond Tutu states that the ANC is worse than the Apartheid government, you know that there is a big problem. 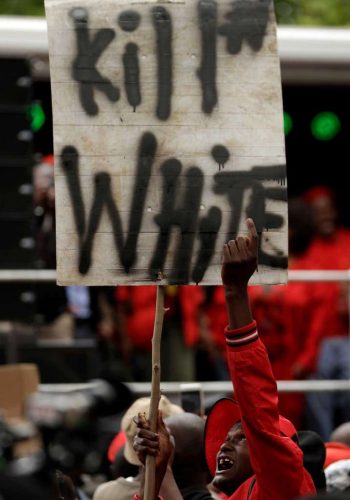 The latest move by the South African Parliament made headlines around the world, when the Marxist leader of the Economic Freedom Fighters, Julius Malema, put forward a successful motion to expropriate white owned land without compensation: Taking land away from legal land owners and redistributing It to black people. The major South African banks – specifically Dr Langa Simela and Dr Tsokolo Nchocho from ABSA and the Land Bank respectively – warned that this move would destabilise the economy as many of the debts owed on this land, which are in the billions of dollars, are owed to the World Bank, African Development Bank and several others.

Thabo Mokwena from the ANC’s executive attempted to calm the foreign media by stating that the land expropriation act will follow the law, and that if a law does not allow the government to take someone’s land legally, the government would just ‘change the law’ so that the act of theft becomes legal. He further stated that South Africa is one of the safest countries in the world in illogical defiance of the 2016/17 police crime statistics which showed 19,000 – 28,000 murders, 3,204 police crimes, 49,660 sexual offences (of which 39,828 were rapes) seen each year and so forth. The South African Government is trying their best to be considered a beacon of democracy by spewing propaganda, much like the North Korean regime has been doing for years.

Simon Roche, a prominent ANC activist who fought for Mandela during the Apartheid years, started a civil defence group called the ‘Suidlanders’ which is currently the largest of its kind in the southern hemisphere. Roche combined data from AfriForum and several human rights observers to paint a bleak picture for the Afrikaner in South Africa: White farmers are twice as likely to die than a police officer in South Africa. That is, men who work the land to produce crops are twice as likely to die a violent death than a man who fights crime every day. It was further concluded that an Afrikaner is 1200% more likely to die than a black man in the United States. The former President, Jacob Zuma, called for supporters to ‘shoot the Boer’, while Julius Malema explained that he is not calling for the murder of whites just yet.  The mainstream media have still chosen to ignore the plight of this Southern African minority.

Looking at the brutality of the attacks on Afrikaners, it is clear than they are motivated by hate, the likes of which have only been observed during brutal ethnic cleansing such as the 1994 Rwandan – and more recent Sudanese – genocide. Men are forced to watch as their wives and young daughters are raped and then dragged behind a vehicle for kilometres. Children are boiled alive while parents are made to watch (see the murder of Amaro Viana). It is not hard to imagine why 200,000 South Africans have emigrated to Australia.

The RSA Government has barely acted or commented on these attacks which have increased in both frequency and brutality. Members of Parliament have encouraged these attacks by dehumanising white people, calling them thieves while blaming them for all shortcomings of the ANC Government. In classic criminological theories, hate crimes are placed under ‘general strain theory’, these are pressures or strains placed on a group or individual when they cannot attain a certain goal via systematic or cultural circumstances. The South African Government and the ruling party have for years shifted the blame for their bad governance to the white minority while in the background officials have been filling their coffers with taxpayer money, grabbing all they can while the average South African suffers. This successfully transferred blame has caused the severely impoverished to take their frustrations to the white Afrikaners.

While the world touts their love for refugees and displaced peoples, because of their skin colour, the white minority of South Africa has been forgotten.