On 26 July, Fairfax and Nine announced an historic merger, which will alter the landscape of Australian media irrevocably. The $4 billion merger will see Nine shareholders owning 51.1 percent of the newly combined company, with Nine’s CEO and chairman remaining in charge.

The takeover (which is about as much of a ‘merger’ as was Nazi Germany’s absorption of Poland) has been met with grief from Fairfax readers and staff alike. Concerns have been floated as to whether Nine – whom Paul Keating said has ‘the ethics of an alley cat’ – will sign up to Fairfax’s charter of editorial independence. Fears of job losses have also arisen upon Fairfax chairman Nick Falloon’s mention of the ‘synergies’ that will be achieved in the newsrooms – check out his media release if you need some top-notch buzzwords for your clerkship applications. Discerning consumers of Fairfax media may also be worried that their weekly Leunig cartoons will be replaced by a Married at First Sight meme.

But what makes the merger such big news is the fact that less than a year ago, it would not have been possible. The takeover was facilitated by a major deregulation of Australian media laws spearheaded by the Turnbull government in 2017.

With the support in the Senate of the Nick Xenophon Team, the federal government was able to put the new rules into effect. The new suite of media regulations abolished two long-standing media control and ownership rules contained in the Broadcasting Services Act 1992 (Cth). 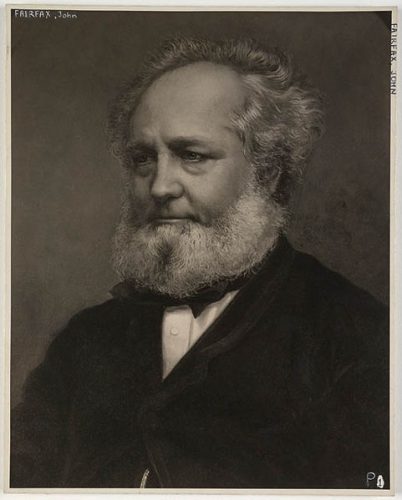 John Fairfax, back in the day. State Library of New South Wales/Wikimedia Commons

The first of these was the ‘two out of three rule’, which limited companies to having an interest in only two out of the three regulated forms of media (television, radio and print) in the same market. The amending legislation made it possible for a company to have a foothold in each of the three outlets.

The second rule to be scrapped was the ’75 percent reach rule’. Under the rule, television licence holders could not reach more than 75 percent of the Australian population.

The 2017 amendments didn’t erase the media control rules wholesale: the ‘5/4 rule’ which requires a minimum of five independently controlled media voices in metro areas and four in regional areas was retained. As was the ‘one to a market’ rule which prevented any individual from having more than one television licence in a market.

Undoubtedly, reform to Australian media laws was necessary. The rise of online streaming and social media had rendered the 75 percent reach rule redundant. Reach has now become unbounded by the previous constraints of analogue technology. However, those rules limiting market dominance – namely the two out of three rule – existed to prevent the very situation we now see arising in the Nine/Fairfax merger.

Even prior to the changes to the Broadcasting Services Act, Australia suffered from some of the highest media ownership concentration rates in the world. In 2016, only five countries had one owner with more than 50 percent ownership of the daily newspaper market. Australia was one of these (with Newscorp owning 57.5 percent of the market). The other four countries were China, Egypt, Chile and New Zealand. Our sheep-loving neighbours aside, this isn’t great company so far as free, diverse media coverage is concerned. A 2016 report by IBISWorld similarly said of the television industry that ‘Australian media and broadcasting industries are highly concentrated in comparison with the rest of the world’. Cross-media mergers such as the Nine/Fairfax merger only serve to make such market diversity issues worse.

Of course, one of the most unfortunate aspects of the takeover is the failure of the board to seize the opportunity to call the new company ‘Fine’.  Such lack of creative thinking does not bode well for the companies being able to put into effect their hoped-for $50 million in annual savings. The tragedy that is the failure to make ‘Fine’ happen is second only to the loss of editorial independence and quality journalism that we are likely to see as a result not merely of this merger, but the federal government’s amendments to the laws which sought to prevent such dominance of news media. So, I guess it’s a good thing they didn’t change the company masthead, because the results of the merger aren’t likely to be Fine at all.