Cambodia is not really one of those countries you hear about when you’re younger.  Vietnam takes up a special place in the collective consciousness of all Australians but its closest neighbour, both geographically and within the context of the proxy wars of the Cold War, continues to remain on the peripheries of history.

Four years was all it took to wreak havoc over a country which could have, at one point in history, had all the potential of a thriving nation. The Cambodian genocide was carried out between the years of 1975 and 1979 by the Khmer Rouge, a Socialist Agrarian Republic. Between 1.5 and 3 million Cambodians were killed. If you visit the Killing Fields, you may be able to see the skulls of some of the victims who were killed during that time, and the ways in which the were killed, what tools were used, how old each victim was, and whether they were male or female. You pass through all this with impassivity. To let yourself feel, would feel like a betrayal of all the pain that was suffered there.

At the Tuol Sleng Genocide Museum, a former high school used as the s21 prison under the regime, you can see vivid photos of prisoners, and the conditions of the cells. Blood stains scar the floor. 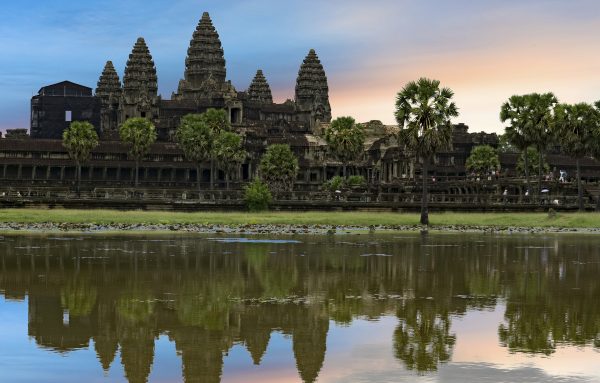 But in another city, Siem Reap, the towering temples of Angkor Wot dot the landscape and throw shadows over red sands and small villages. The strength of a nation – which was nestled in the weeds during the regime – now stands reinvigorated for us all to see.

Walking down the streets imbued me with an overwhelming sense of familiarity. There are coffee shops and tea houses, tech stores and frozen yogurt huts, street vendors selling mango with chilli paste, a memory of my childhood from another part of the world. There are rickshaws and cars, traffic lights and temples. I moved through all this knowing that although this is another country, it is simply the home of another person, who is probably in a lot of senses, a lot like me.

When I think of these two faces of Cambodia, I feel bitter. Bitter at my own ignorance, not only of its tragic past but also of its rich history and culture. I feel resentment at the western focused education system here in Australia which had failed to honour the lives of those lost and the history that lies next door.  Without minimising the tragedies that occurred all over the world, I felt I had a certain responsibility to go beyond and learn about Cambodia, a name that emerges occasionally without the import it has for me now.

We talked to many NGOs who are currently grappling with the current political agenda of Cambodia and its future. We visited the ECCC, the international court created to try those who led the Pol Pot regime. We visited courts where we learnt about the struggle in implementing the rule of law when culturally and historically it has had very little meaning. The rule of law: Something I took for granted. We visited a lawyer training centre where we learnt how hard it was to be a lawyer, to become a lawyer, to practise post-conflict.

There were eighteen of us on the trip. And each of us took something different away. Me, I gained a new lens through which to see, new questions, and a few answers.